For the first time in Japan, you can use LINE to request bulky trash pick ups and pay the fees! Trials for using LINE Pay instead of buying bulky trash tickets at the convenience store have begun.

LINE is looking for ways to make communication easier before and after payment, which is key to a cashless society.

The trial uses a new feature added to the popular "福岡市粗大ごみ受付" (Fukuoka City bulky trash requests) official LINE account (LINE ID: ＠fukuokacity_sdg) that was started in September 2018. The new feature allows payment of bulky trash requests using LINE Pay. This is a first for Japan, removing the need to go to a convenience store or other shop to pay, and making the whole process, from application to payment all possible within the LINE app. Initial trials are in Chuo-ku only, but if they prove successful, will be rolled out to all other areas of Fukuoka City. 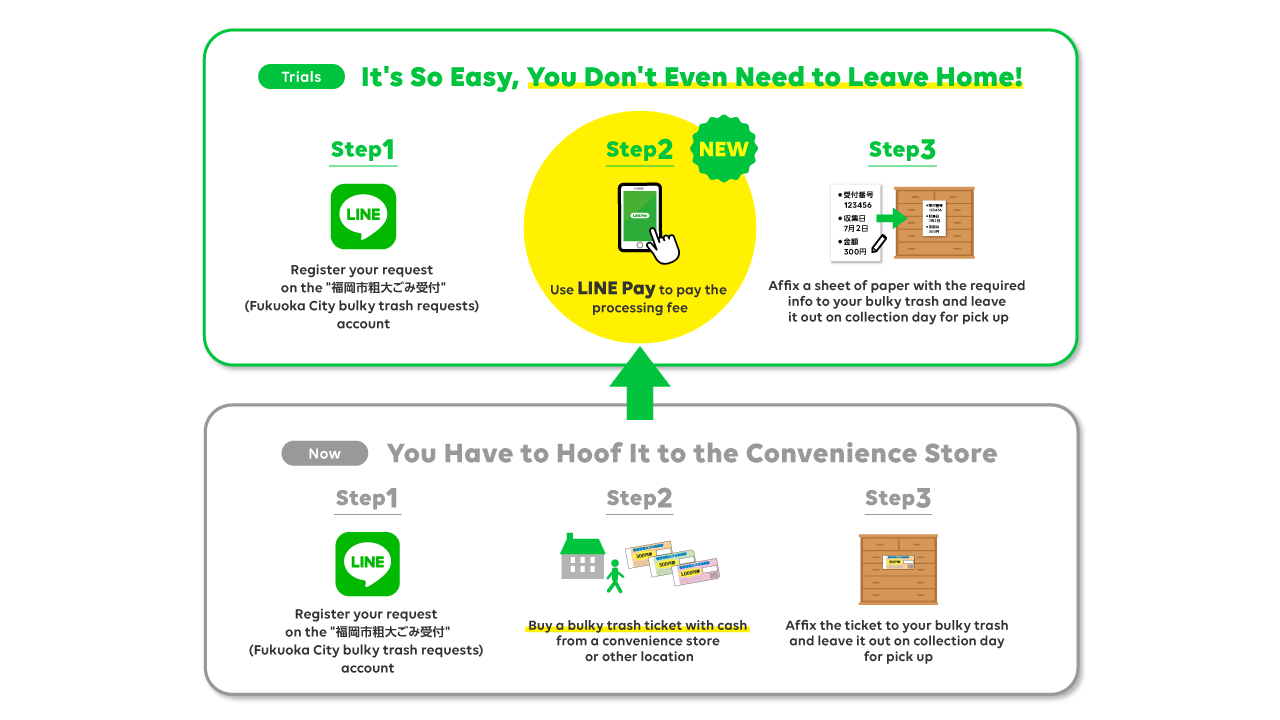 How to use this feature

As the population of Fukuoka City and the number of people coming and leaving increase every year, so does the amount of bulky trash requests. An official LINE account was set up in order to make the process easier, and trials began in September 2018. The feature incorporates a chat bot that allows users to easily complete the whole process on their mobile device, the first tie-up of its kind with a local government in Japan.

The trial finished at the end of April 2019, with the following results.
・ User satisfaction was 98% (In a survey conducted for this trial, users said, "The process was simple and fast," "I was unable to call for trash pick up during office hours, but with LINE, I was able to ask for trash pick ups any time," etc.)
・ 15% of trash pick up requests were via LINE
・ High rate of users kept using the trash request LINE account after adding it
The program was officially instated in May 2019, and by June 2019 the account had over 33,000 users registered.
However, many trial users said, "It would be more convenient if we could also pay for pick up fees using LINE," and so a new trial using this feature was started.

These cashless transaction trials are another way the LINE Group has been closely involved with Fukuoka City's move towards cashless transactions. We believe that making it easier to communicate before and after paying for something is the way to truly change the way people live in Fukuoka City for the better. In this new trial, we are hoping to test the effectiveness of a comprehensive solution that combines cashless payments and communication solutions.


The LINE Group isn't stopping here. We will continue to exploit our cutting-edge technologies in areas such as AI and FinTech in order to make a prosperous and convenient Smart City a reality.