Infrastructure Report is the first feature of its kind to be integrated into the official LINE account of an ordinance-designated city. It lets residents easily notify responsible city or ward departments of damage (such as pollution, broken guardrails, or damaged playground equipment) to infrastructure like roads, parks, and river dams from Fukuoka city’s official LINE account. By utilizing the city’s official account (which already has 1.61 million registered users), this feature supports the development of a safe and secure city by making reporting problems easier for residents of all ages.

Infrastructure Report also makes dealing with reports easier for municipalities by preventing issues that have come up in the past, such as inaccurate reports or insufficient information. The feature provides a system for resolving more problems faster by significantly reducing both the effort required to make a report and the workload for government employees. 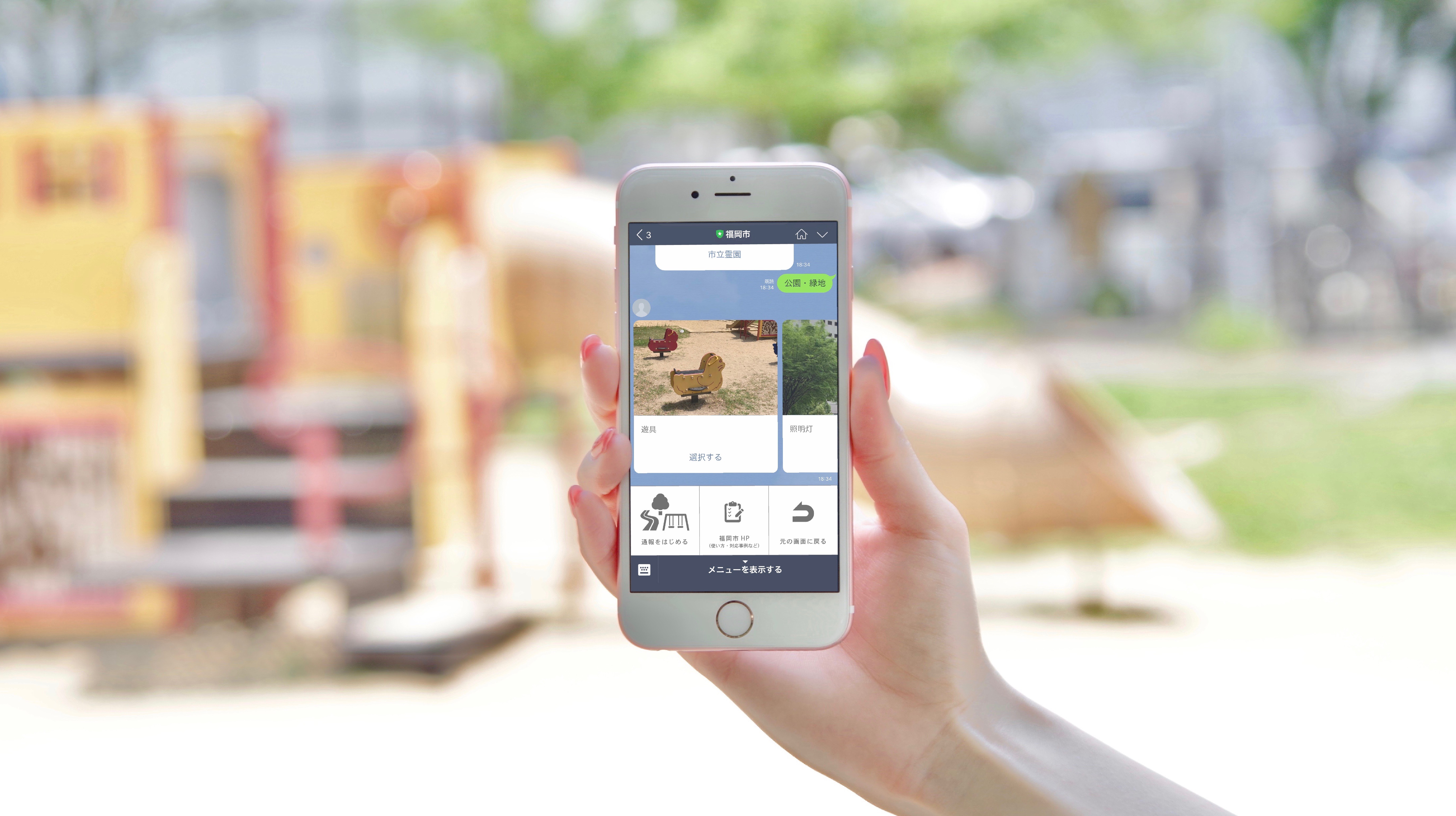 Launched in April of 2017, Fukuoka city’s official LINE account was made to deliver only the information that its more than 1.61 million users really want and need. By configuring their information type, area, child's age, and other settings, users can receive information relevant to their daily lives. This includes emergency and evacuation announcements, air quality forecasts, trash collection day notifications by area, and age-appropriate information on child rearing. Infrastructure Report is the latest addition to Fukuoka city’s official LINE account. 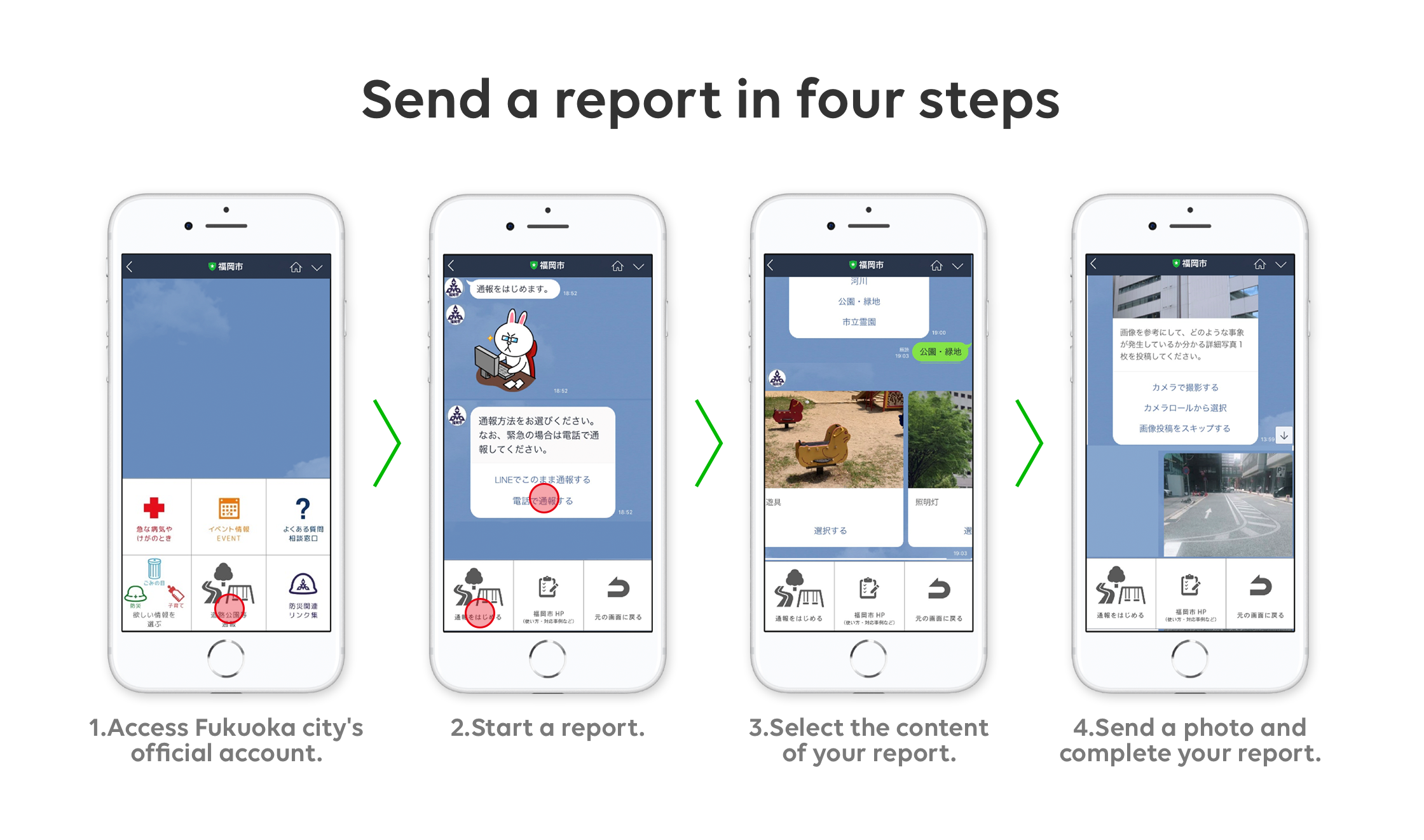 Behind the Development of Infrastructure Report

We at LINE Corporation and LINE Fukuoka Corporation aim to make Fukuoka a "Smart City" utilizing the future-oriented benefits of LINE's technology through the "Comprehensive Partnership Agreement on Community Collaboration Projects" with the city of Fukuoka. However, we cannot achieve this Smart City alone; it is essential that we co-create it with the citizens of Fukuoka as well as various companies and organizations. In the future, we hope to further accelerate Fukuoka’s transformation into a Smart City by utilizing its official LINE account, which already has a vast user base. Infrastructure Report is our proposal to the city’s municipalities and residents for creating a safer and more secure city together.

Being prepared is key to securing civic safety, including in times of emergency. Reports from citizens about damage around the city are a crucial part of preparing for emergencies, and Fukuoka has a hotline as well as responsible departments for fielding such reports. However, there have been difficulties, such as:
• Many of the some 19,000 reports made annually are incomplete or include inaccuracies, and gathering extra information adds civil service man-hours.
• Once a report is received, it takes a long time to connect the reporter to the correct department and then organize the content.
• Regardless of urgency, most reports come in through the hotline or visits to the responsible departments.

In order to resolve these issues and enable the city to fix more problems faster, we integrated a chatbot during development. The chatbot minimizes the amount of text that users have to enter and also makes the information they report easier to judge, allowing government workers to collect all the information they need.

Infrastructure Report makes the reporting process easier for everyone by eliminating the need to recollect necessary information, split it up among the responsible departments, and organize the report content. We estimate that this will allow 3,000 more reports to be handled per year in the same amount of time. The feature also lets users with urgent reports that require immediate attention call the responsible department directly. The goal of providing separate reporting methods is to determine the priority of each report, making it possible to prevent accidents and incidents before they happen. 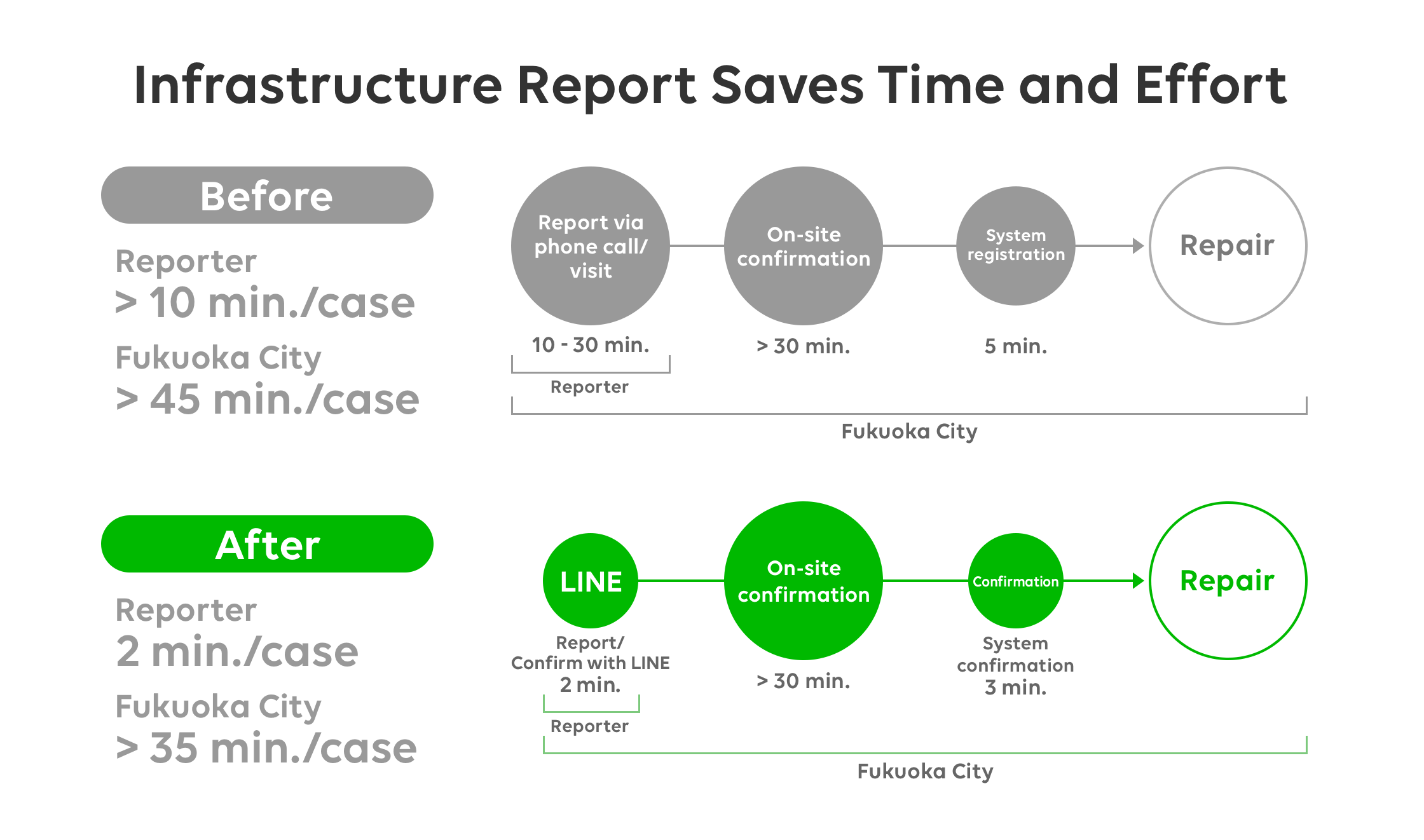 We at the LINE Group will continue to strive toward making Fukuoka a Smart City together with its citizens, government, companies, and organizations through the utilization of our cutting-edge technologies in areas such as AI and FinTech.