Leave behind your umbrella and wallet and just go out! The umbrella sharing service "i-Kasa" lets you easily borrow umbrellas via LINE and pay the rental fee with LINE Pay.

LINE Group seeks to connect people to the information, products, and services they desire with the help of the Fukuoka City government and private enterprises, and in so doing, to help make Fukuoka City a more convenient and enjoyable place to live (making it a "Smart City") 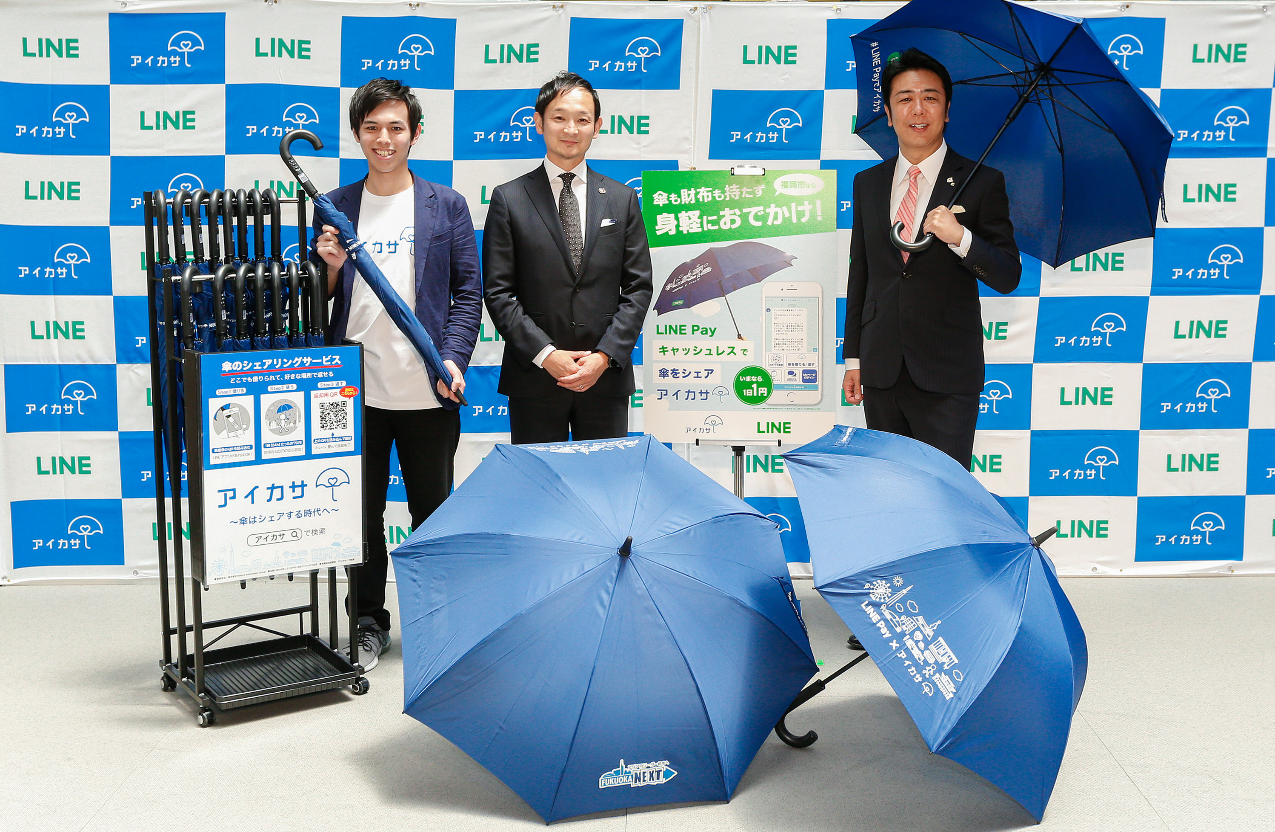 i-Kasa is an umbrella sharing service that started in December of 2018, and is the first service of its kind in Japan. This service starts operating in Fukuoka City on May 21, 2019, following its start in Shibuya-ku, Tokyo. i-Kasa can be used by opening one's LINE account and reading the QR code printed on an umbrella. The standard fee is 70 yen per day (24 hours), and the fee is payable with LINE Pay. Returning an umbrella is a simple matter of reading a return QR code at the closest umbrella share spot.

The goal of this joint venture is to create an "on-demand society" in which you can pay for things, get umbrellas, and get information whenever you need it

LINE Corporation, LINE Fukuoka Corporation, and LINE Pay Corporation are teaming up via work such as the "Comprehensive Partnership Agreement" and "Fukuoka City Full Support Verification Test" to bring futuristic benefits to Fukuoka with LINE's technology and in so doing, make Fukuoka a "Smart City." Great strides have already been made with regard to the use of this technology for the dissemination of information and the promotion of cashless payments, and LINE Pay is being increasingly adopted at Fukuoka City government facilities and counters as well as at private facilities.
LINE Fukuoka Corporation, LINE Pay Corporation, and Nature Innovation Group Co., Ltd. have teamed up to run the "Only in Fukuoka! 1 Yen Umbrella Rental Campaign." With this campaign, LINE Group is providing a chance for people to experience living in an "on-demand society," where through cashless payments and sharing, they can go about their day conveniently with just a smartphone (using LINE and LINE Pay), but without the need to carry a wallet.

- Far left image: The "Fukuoka City LINE Official Account" makes it easy to check the weather and information relevant to going out.

With the start of the i-Kasa service in Fukuoka City, we're running a joint campaign in which people can rent umbrellas for 1 yen a day when they pay the fee with LINE Pay.
Through this campaign, we hope to let more people experience going out without carrying an umbrella or wallet.

Campaign name: Only in Fukuoka! 1 Yen Umbrella Rental Campaign
Campaign period: Tuesday, May 21, 2019 until Thursday, June 20, 2019 (with a possibility of extension)
Eligibility: Anyone who borrows an umbrella with the i-Kasa umbrella sharing service in Fukuoka City during the period of the campaign, and who selects LINE Pay as the payment method.
Organizers: LINE Fukuoka Corporation, LINE Pay Corporation, Nature Innovation Group Co., Ltd.

We have carried out multiple projects with Fukuoka City thus far via such work as the "Comprehensive Partnership Agreement" reached with Fukuoka City in August, 2018 and the "Fukuoka City Full Support Verification Test." We aim to make Fukuoka City a more attractive city through our efforts to improve the convenience of government services and citizens' lives. 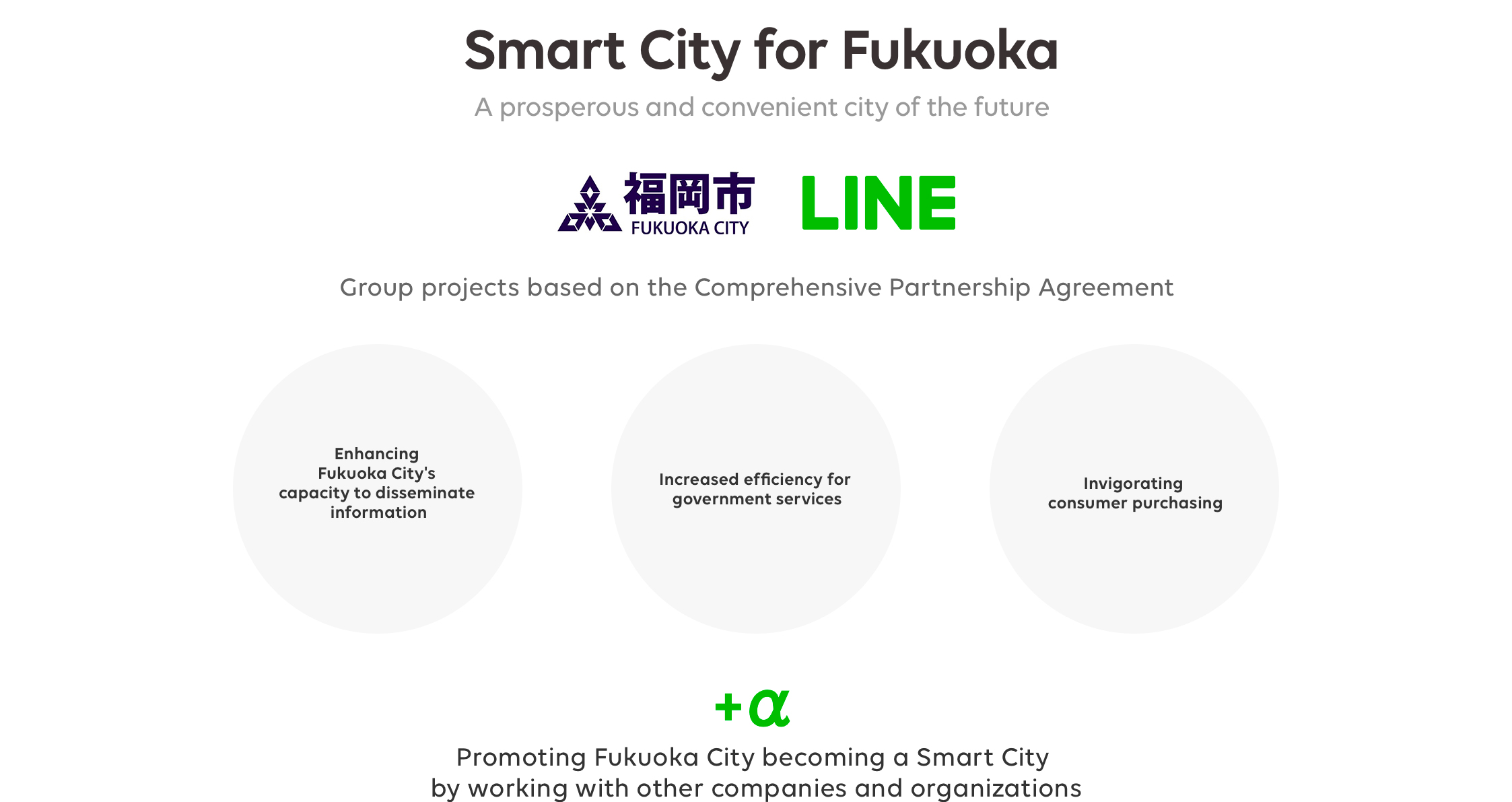 We are looking to accelerate Fukuoka City becoming a Smart City by working with a variety of companies and organizations moving forward, and we consider this project to be our first step.

The LINE Group will continue to concentrate on partnering with other organizations and make use of our cutting-edge technologies in areas such as AI and FinTech in order to make a prosperous and convenient Smart City a reality.