LINE Corporation (located in Shinjuku Ward, Tokyo; Representative Director, President, and Chief Executive Officer: Takeshi Idezawa) together with its subsidiary and operator of the LINE Pay service (which allows users to make mobile money transfers and payments through the LINE messaging app), LINE Pay Corporation (located in Shinjuku ward, Tokyo; Representative Director and CEO: Ko Youngsu), and another one of its subsidiaries, LINE Fukuoka Corporation (located in Hakata Ward, Fukuoka; Representative Director, President and CEO: Noritaka Ochiai), are pleased to announce that the results of the midterm report on the trial “Cashless” project which has been going on since last June were shared at Fukuoka’s Growth Next seminar, “Fukuoka’s Future in Fintech.” This was an event commemorating the countdown to the G20 meeting in 150 days, where finance ministers and central bank governors will gather on June 8th and 9th in Fukuoka.

To achieve the goals set out by the LINE Group, a trial of LINE Pay’s “My Code” payment feature has been underway at over 200 commercial facilities. These include eight shops in Kawabata shopping arcade, ten public facilities (such as Fukuoka Zoo, Fukuoka City Museum, and Fukuoka Tower), 21 yatais (outdoor food stalls), 47 drug store chains, about 60 retailers inside Hakata Riverain Mall, and 72 shops at Fukuoka Airport.

The trial goal envisioned by LINE

Our aim is to achieve a truly cashless society by allowing many users (regardless of their age, gender, or nationality) to take advantage of LINE Pay services consistently and securely, and by having both users and business owners experience the benefits of using this technology.

Little bias within any specific age cluster; high usage rates among teens and users in their 20s stood out.

After beginning the trial, we launched several Fukuoka-specific promotions, and due to increased media (including television) coverage on both a local and national scale, recognition and usage spread among users.
In the Fukuoka area, LINE Pay has the highest usage rate among different cashless payment services. Looking at user attributes, we found that while the usage rates are high among teens and users in their 20s, there is little bias within any specific age cluster, suggesting usage across a broad range of age groups.

No instances of system trouble

As usage became more active, businesses began to see the benefits, such as improved operating efficiency and security of sales management (cash) as well as acquisition of new customers by adopting LINE Pay (which is becoming popular among younger age groups).
According to a survey of employees at public facilities, 83% of the respondents answered that wanted to continue using LINE Pay services, citing “improved user convenience” and “the ability to obtain and analyze user data” as reasons.

*Source: LINE research (from August to December of 2018) 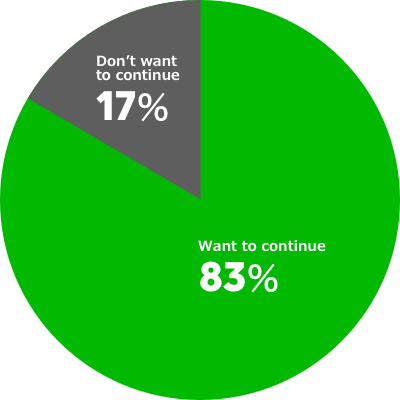 Issues found and their solutions

In some instances, we were not able to fully harness the convenience of going cashless. For example, while cashless payment for facility entrance fees was accepted, there were certain places inside facilities where payments could only be made in cash. We also found that while StarPay devices were installed throughout public facilities to support tourists from overseas, for those facilities that did not report a high tourist turnout, the “Print QR” feature (which lets users input an amount from their side) may be more appropriate.
Based on the issues we identified, we will pursue measures for creating environments where cash is not necessary and offering facilities optimized payment methods regardless of whether they cater to tourists from overseas.

The next steps to achieving a truly cashless society

We believe the structure of the cashless society that the LINE Group envisions must resolve the issues that both public and private entities have in order to be realized. Moving forward, we will create added value that incentivizes cashless payments and aim to achieve a truly cashless society.

Using AI, we began running a trial in September 2018 of a system that let users apply to have their oversized garbage picked up through the “Fukuoka City Oversized Garbage Reservations” LINE account. Users can make reservations with their smartphone 24 hours a day and check how much they will be charged just by selecting the item they want to throw out, making it very convenient. This system has been very well received by users: about one month after its launch, more than 10,000 people had registered the account, and it enjoys a 98% user satisfaction rate.

In December 2018, our “LINE Smart Government AI Moving Certificate” was selected by the Proof-of-Concept Full Support Business Program as one of the services to be tested. We are collaborating with Fukuoka City on several projects that utilize LINE’s state-of-the-art technology (such as AI and FinTech) to achieve a world-class “smart city” that is richer and more convenient for its citizens.
*The “LINE Smart Government AI Moving Certificate” service is scheduled to begin in Spring 2019.

In the future, the LINE Group will continue to contribute to the realization of a “smart” city that promises convenience and vibrancy by pursuing development that utilizes LINE’s existing infrastructure as well as cutting-edge AI and FinTech in the sectors of both public services and payment.