Under this agreement, the city will work to transmit municipal information about various sectors essential to daily life utilizing the "LINE" communication app. This is the first time LINE has concluded such an agreement with a government-designated city.

As a facilitator of communication via smartphones and lifestyle infrastructure, LINE is pursuing opportunities that will link it with local governments. Since acquiring a LINE＠ account (ID: @fukuokacity) in 2012, Fukuoka City has transmitted environmental （e.g. PM 2.5 forecasts, etc.) and other such information to its citizens. This agreement was concluded by both parties with the unified goal of strengthening the provision of information, and is geared towards further civic service improvement and area revitalization.

With regards to the content of this agreement, we are considering the creation of a framework that would allow users to select and receive the information they want from among various sectors (e.g. disaster prevention, child-rearing, environment, etc.) via Fukuoka City's LINE account in real-time. In addition, we plan to offer "Fukuoka City×LINE FRIENDS" LINE Stickers (in which LINE characters highlight Fukuoka's specialties and charm) to registered users of Fukuoka City's LINE account free of charge (stickers to be released in Spring of 2017).


In the future, LINE plans to broaden it horizons to emergency information transmission via LINE as well as disaster prevention and recovery efforts, and will continue to consider the construction of coordinated structures and systems with not only Fukuoka City but also other municipalities.

We hope to proactively cooperate with and support municipalities in the future. 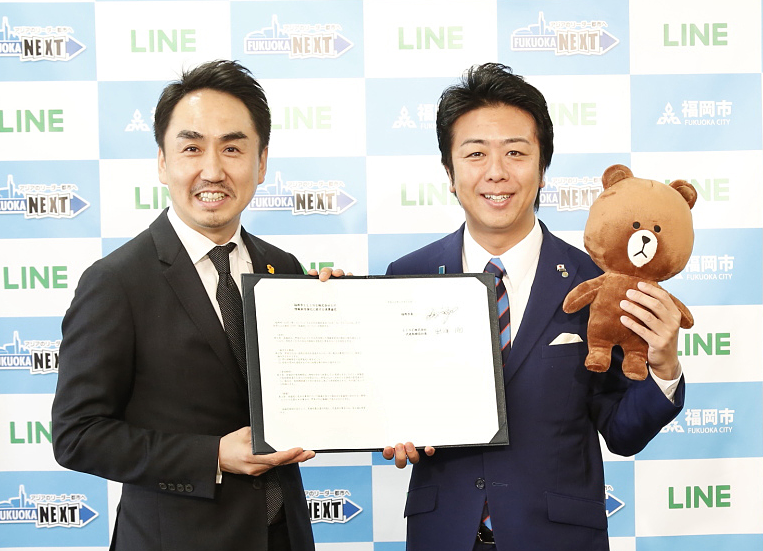